Commercial truck accidents can be complicated. Our law firm can help

Talk to an experienced Dallas truck accident attorney and they will tell you right away – these claims can be challenging. Whether you’re dealing with a high-speed tractor-trailer accident on I-30 or I-45, a jackknife accident on I-20, or a rear-end delivery truck collision on Commerce Street, commercial truck accidents often result in serious injuries.

This is especially true in Dallas and throughout Texas. Every year, there are more truck accidents in Texas than in any other state in the country. In recent years, twice as many fatal truck accidents involving large trucks (18-wheelers, delivery trucks, tanker trucks, etc.) occurred in Texas compared to the second deadliest state.

Along with all these fatalities, many people sustain severe injuries. Such injuries can result in lifelong chronic pains, disfigurements, disabilities, and many other problems. Expenses can add up fast too, including medical bills, vehicle repairs, and lost income if injury victims are unable to work while they recover.

And unlike car accidents, there is often more than one at-fault party when it comes to commercial truck accidents. So what should you do after a truck accident in Texas? What are your options? Know your rights. Talk to an experienced Dallas truck accident lawyer. Contact The Marye Law Firm right away.

For more than two decades, our dedicated legal team has been standing up for the rights of people injured in truck accidents in Dallas and throughout Texas. We understand the difficulties victims face. We know how serious such accidents can be for injury victims and their families. That’s why we want to help.

Whether you’re seeking compensation in the form of a settlement or filing a truck accident lawsuit, we believe we’re the right Dallas law firm for you for many different reasons. 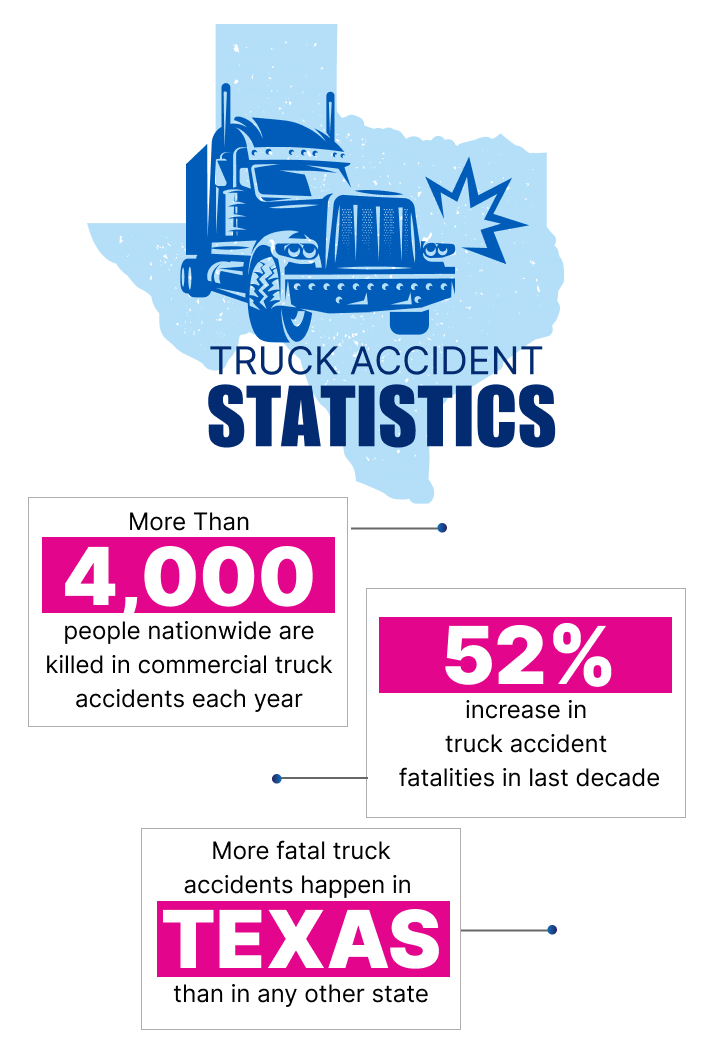 Mr. Harris was involved in a wreck with an 18-wheeler that had run a stop sign in southern Louisiana. He suffered a fractured skull that required the insertion of metal plates in his head.  Mr. Harris was initially represented by a Louisiana attorney who had estimated the value of his claim at $600,000 and who recommended he seek treatment from a chiropractor.

Mr. Harris subsequently contacted The Marye Law Firm, and we referred him to a shoulder specialist. The specialist immediately diagnosed a torn rotator cuff and that was surgically repaired.  The Marye Law Firm also consulted with a neurologist and a neuropsychologist who evaluated Mr. Harris and diagnosed him with a brain injury.

Smith, a flooring installer, was driving a pickup truck on Interstate 635 in Dallas County with D. Robertson, a construction worker. A van was behind them, and a pickup was behind the van. Traffic came to a stop, and D. Coleman, in a tractor-trailer, rear-ended the pickup, which rear-ended the van, which rear-ended the Smith and Robertson. The visual property damage to the Smith and Robertson’s vehicle was minimal. As a result of the collision, Smith sustained injuries to his neck and back, including an aggravation of a prior lower back injury. Robertson sustained neck and back strains as well as a wrist injury. 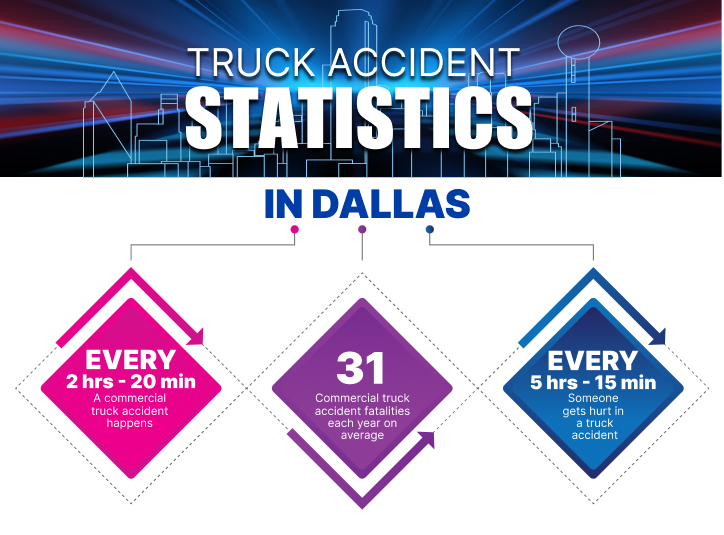 As you can see, the majority of truck accidents occur due to negligence or mistakes made by the truck driver, the trucking company, or another at-fault party. Some of the most common causes include: 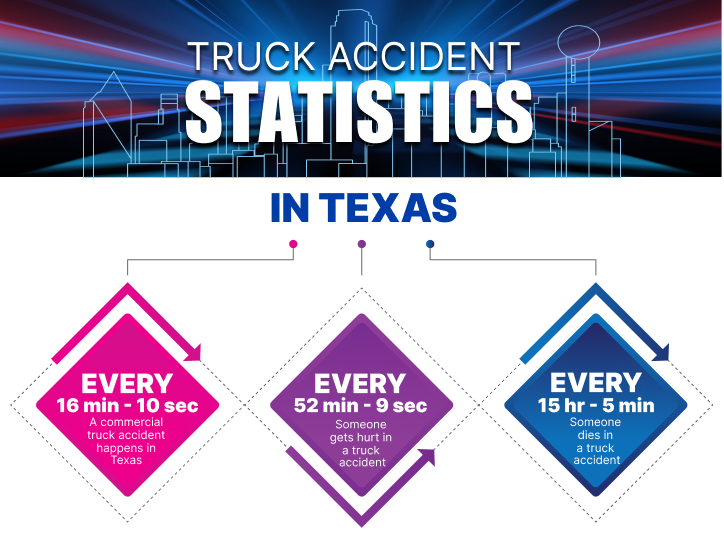 Truck accidents can cover a wide range. Common types include:

What laws apply to truck accidents?

As briefly explained above, different laws apply to accidents involving commercial truck drivers. Many of these laws can be found within Title 49 of the Code of Federal Regulations (CFR). Some of the most important federal laws under Title 49 of the CFR include: 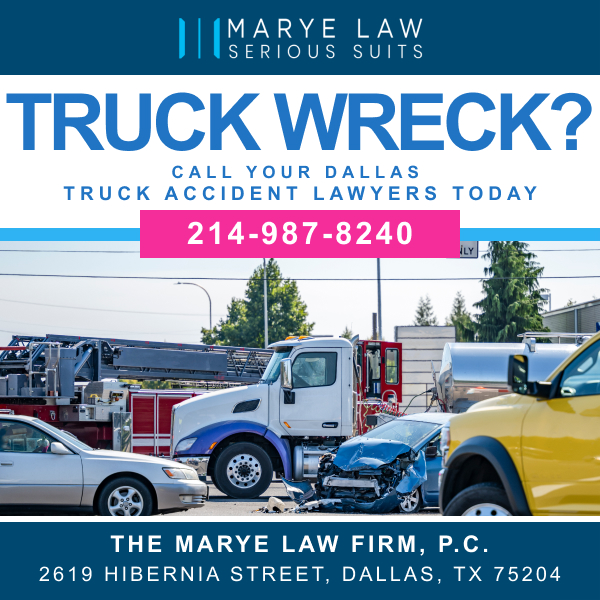 Who’s responsible for paying for my truck accident?

One of the major reasons why commercial truck accident cases are so complicated is because there’s often more than one at-fault party. This means you might be able to seek financial compensation from more than one person or company. Such at-fault parties can include:

How much is my case worth?

There’s no set dollar amount when it comes to truck accident claims. Some cases are worth thousands of dollars. Others might be worth significantly more. The bottom line is injury victims should be compensated for all their accident-related expenses.

Depending on the circumstances, that might mean you may be able to seek financial compensation for:

Remember, you didn’t do anything wrong. You shouldn’t have to pay for someone else’s mistakes. Get the money you deserve. Talk to a Dallas truck accident lawyer at The Marye Law Firm.
Return to Top

What clients say about our truck accident lawyers

“Professional and compassionate team of lawyers and staff. A co-worker recommended The Marye Law Firm last year after the loss of my husband in a trucking accident. They were able to win my case and more importantly, they understood my needs and were able to assist from start to finish. Would recommend to anyone who has been involved in a trucking accident in the Dallas area” – Shannon

“Before my involvement in a trucking accident that left me unable to work, I had never hired a lawyer before. I was nervous about the process and had a lot of questions along the way. The Marye Law Firm’s team put my mind at ease by explaining everything in terms that I could understand. I appreciate all of their support and help during this particularly rough patch in my life.” – Brad

“I was fortunate enough to survive a run-in with an 18-wheeler earlier this year, but not without a severe spinal injury. My injury affects every aspect of my life and has made it hard to live a normal life. While most people don’t know how difficult it is to manage this pain every hour of the day, The Marye Law Firm’s staff got it. They ensured that I was comfortable at every meeting and truly treated me like a person instead of just another case like some of the other firms I had contacted. Highly recommended.” – Terri P.

“During all legal proceedings, The Marye Law Firm’s staff was exceptional. They were prepared, timely and confident which resulted in compensation that I desperately needed to cover medical expenses and lost wages. Thanks, The Marye Law Firm!” – Catherine
Return to Top

Our approach to truck accidents

We take a very detailed, aggressive approach to every truck accident case we handle at The Marye Law Firm. Our multi-faceted strategy for successfully resolving each claim varies from one client to another. But in nearly all cases, our tactics involve the following essential elements.

Should I file a lawsuit?

Many truck accident injury victims decide to file a lawsuit seeking compensation for their crash. This approach can often be an effective way to get the money you deserve. However, it’s important to understand just how complicated the legal process can be when it comes to commercial truck accidents.

First, you need to determine who caused your accident. Was it the truck driver, the trucking company, or someone else? What makes commercial truck accidents different is there could be more than one at-fault party. Once you determine who’s the at-fault party or parties, you can file a lawsuit against them.

You will also need to decide where to file your truck accident lawsuit. Because commercial truck accidents in Texas may involve companies from another state or even another country, where you choose to take legal action can make a big difference.

For all of these reasons – and many more – this is why it’s important to talk to an experienced Texas truck accident lawyer right away. Deciding whether to file a lawsuit can be a difficult decision. Your attorney can advise you on whether this approach makes the most sense for you.
Return to Top

Why you should act fast

Time is of the essence when it comes to making a large truck accident claim. Part of it has to do with the strict deadlines in each state for filing a lawsuit or taking other legal action. Such deadlines are known as the statute of limitations. In Texas, injury victims must take legal action within two years of the crash, according to Texas Civil Practice and Remedies Code, Title 2 § 16.033.

But that’s just the start. What you might not realize is other deadlines often apply long before the two-year deadline expires. Such deadlines involve when trucking companies can destroy certain records, including:

Don’t miss out on your opportunity for justice. Make sure you talk to an attorney right away. That way, your lawyer can immediately request access to such evidence before it’s destroyed forever.
Return to Top

This might be your only chance to demand the money you deserve. Seize it. Contact our law firm and schedule a free case evaluation with a Dallas truck accident lawyer you can trust. We promise to get right to work on your case. That way, you can focus on what matters most – recovering from your truck crash.